A Tale from Madagascar
As Retold by Erica Helm Meade 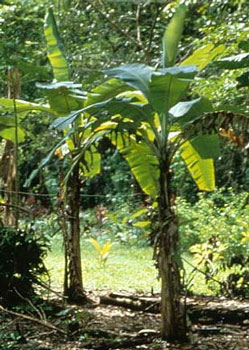 The couple considered the options for some time. If they chose to be childless, they would always be restored to life, like the moon. It would be lonely, however, and they would have no one to help them with their work, no one to teach, to love, or to strive for. They told God they preferred to be fruitful like the banana tree. God granted their wish. They had many fine children and a happy life and then they died. Since then there has been much love and new life on this earth, replenishing generation after generation. But since the first couple chose, each individual’s life is brief, and in the end the body withers like a banana tree.

In my book, The Moon in the Well: Wisdom Tales to Transform Your Life, Family and Community, each tale is followed by a commentary, including a listing of themes from the story and true life examples as to how the story can be used in daily life. Here follows the commentary for “Why Death Is Like A Banana Tree” from that book.

Death/ Sacrifice/ Accepting mortality: This gem from Madagascar offers the tree of life as a symbol of the everlasting. It suggests that much of the richness of the human experience is tied to our mortality. We would not endeavor to love and to create, if it weren’t for our role as mortal creatures with finite lives in which we eventually grow old and die.

Posterity/ Life-death-rebirth cycle/ The inevitability of old age and death/ Grief and loss: A seventy-seven-year-old woman named Iris considered herself to be an agnostic. She was diagnosed with cancer and her doctor said she had between three and six months to live. Iris found herself reviewing her life. Had she lived it well? Had she done enough for her loved ones? Would any part of her live on, or would she simply become “food for the worms?” Iris was assigned a hospice counselor, and somewhere in the course of their dialogue, the counselor introduced this tale. Iris found it resonated with her sensibilities about death. She couldn’t picture herself sitting on a cloud among harp-playing angels, but she could picture her progeny, thriving like a fruitful orchard in her wake. “That’s enough for me,” she told the counselor, “that they carry on, living full lives when I’m gone.” The story affirmed her view of posterity and satisfied her sense of life and death as complementary parts of a greater continuity.

Reverence for nature/ The more-than-human world: Like so many of the tales of old, the reference points for understanding are great things in the natural world. In this case God calls upon the restorative powers of the moon and the banana tree to illustrate the options for human immortality.

My retelling of The Banana Tree is based on “First Man and Woman Choose” In Susan Feldman’s African Myths and Tales.

Tales and commentary excerpted with permission from The Moon In the Well: Wisdom Tales to Transform Your Life, Family and Community by Erica Helm Meade, Open Court : Chicago, IL., 2001. Purchasing information available at www.opencourtbooks.com

Erica Helm Meade is a Seattle-based psychotherapist and storyteller. She is author of Tell It by Heart: Women and the Healing Power of Story and The Moon In the Well: Wisdom Tales to Transform Your Life, Family and Community, both published by Open Court books www. opencourtbooks.com