A Tale from Nepal
Retold by Alida Gersie

Once there lived an old woodcutter. He was very poor and could scarcely make ends meet. One day he went into the forest and gathered a lot more wood than usual. As he bent down to lift the bundle onto his shoulders he found that he was too frail to raise the heavy weight. He sighed deeply and cursing his age, said: “If only I were dead.” Suddenly someone stood next to him. A strange voice asked: “Did you call me?” The woodcutter felt a great fear. “No, no I didn’t”, he lied. 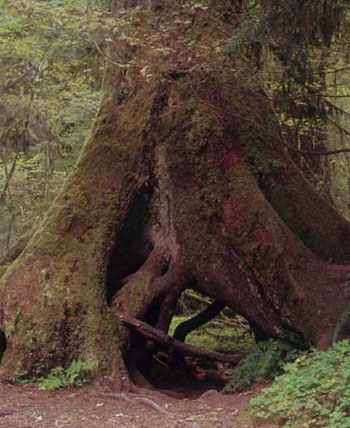 Ignoring the old man’s clumsy deception Death made himself known. He explained that he had simply come, because he had been called. The woodcutter became less frightened and looked at Death. He found it very hard to believe that this was really Death himself. Seeing his doubt, Death pointed at an old woman who bathed in a nearby pond. The woman suddenly fell and died. This immediately brought the woodcutter to his senses. He at once remembered why he had wanted to die, and asked Death, now that he was here, if he could please give him a hand and lift the bundle of wood onto his shoulders. Death gladly obliged. The woodcutter was ready to hurry home, when the thought came to him that he might ask how much longer he had to live. As he left, Death answered: “Five years to a day.”

That night the woodcutter did not sleep very well. Tumultuous thoughts haunted him. Early the next morning he returned to the forest. He looked for a big, big tree. And when he found it, he cut a single hole in the bottom of the tree. Then he started carving out the inside of the trunk. He carved for five whole years.

Then Death returned. Just as he said he would. The old woodcutter promised to come along, but, he said, before he was ready to leave the world, he so much wanted Death to see what he had carved as a gift for the people who would live long after he had died. They went to the woods. Deep into the woods they went. Death climbed into the tree-trunk. Proudly the woodcutter showed him round. When Death was in the top of the tree-trunk house, the woodcutter hastened down, crept outside, jammed a log into the entrance hole and hurried home.

Time passed. People and animals gave birth, but Death came to no one. Hunger and illness resided everywhere, yet nobody died. Even the gods became alarmed. They approached the Lord Shiva, the great one, who, donning the garb of a human being, decided to come to earth. He went immediately to the old woodcutter and asked him if he still wanted to go on living.

The poor woodcutter was by now even older and weaker, and so ill that he could hardly leave his resting- place, let alone return to the forest where Death was locked inside the tree- house. Quietly the old woodcutter acknowledge that, at last, he was ready to die. Then the Lord Shiva helped the old man to get up. Slowly they walked to the forest. They went deep into the woods. Then he opened the tree and released Death. Death was shaken by his ordeal in the tree. He pleaded with the Lord Shiva to make him from now on invisible, so that people could no longer devise ways to stave him off. “So be it”, Lord Shiva said.

From that day onwards Death has been invisible to humankind, though he sees all of us. And the woodcutter, he died.
© Alida Gersie, 2003

How we too might long to have the choice to lock death away inside the trunk of the tree of our life. Incarcerated, until the day we are willing and ready to surrender to its might. In this benign tale the woodcutter endures no punishment for his attempt to do away with Death., The Greek Sisiphys who likewise attempted to remove Death’s power by stealing the pen with which Death writes the names of the dead in a book, must to this very day push a heavy boulder towards the top of a hill. When the top is reached, the rock falls back, and the labour of Sysiphus begins all over again.

The story tells us that once the woodcutter encountered Death his life was forever changed. He went into the woods and from that day onwards worked inside the tree. We do not know whether he tried to create his ‘magnum opus’, the greatest of all his works, for those who would come after him, or whether he designed the lockable space with the sole aim of immobilizing Death.

What we do know, though, is that the kind of mortal existence he chose for himself during the last five years of his life was far removed from the fellowship of other people. He went into the forest, and dwelled alone. Thus he devoted his life to death; his work became an acknowledgement of the temporal character of human contributions. When the tree died, his life’s work would die. Thereby the old woodcutter succumbed to the wonderland where death is not only a danger, but above all a lure. Unable to surmount his fascination with death and dying, he paradoxically entombed himself. Our woodcutter failed to win back life, a human life, an earthly life. Heidegger says that ‘death is a strange and unhomely thing that banishes us once and for all from everything in which we are at home.” Though we may be banished, we still have to find a way of returning to a simple human existence and to human relationships. The lure, dread and fascination with death must be overcome. Only then can our earth and we breathe and thrive.

Story and commentary adapted from:

Another contemporary source for this story is:
Sharma, N. (1971) Folktales of Nepal, Sterlin Publishers.
© Alida Gersie, 2003.

Alida Gersie PhD, SRAT (Drama) is an independent consultant, writer, trainer and therapist with an international practice. She specialises in the uses of storymaking and storytelling to enable troubled individuals, groups and organisations to achieve productive change. She is author and editor of several core publications in this field, including: Storymaking in Education and Therapy (with Nancy King), Storymaking in Bereavement and Reflections on Therapeutic Storymaking: The Use of Stories in Groups (Jessica Kingsley Publishers: London). Her practice builds not only on extensive therapeutic experience with multiply traumatised people, but also on many years in Higher Education as Director of Studies of Postgraduate Arts Therapies Programmes. Since the early 1970’s she has advised professionals in Britain and abroad on how to maximise the efficacy of arts-based interventions in conflicted communities.

Further discussion of the storymaking process can be found in a number of books by Dr. Alida Gersie. These include:

Storymaking in Education and Therapy (with Nancy King 1990),

Storymaking in Bereavement (1991), Reflections on Therapeutic Storymaking: The Use of Stories in Groups (1997). All published by Jessica Kingsley Publishers, London. Distributed in the USA by Taylor & Francis (215 785 5800).