A Tale from Africa/San Peoples
Retold by Moyra Caldecott 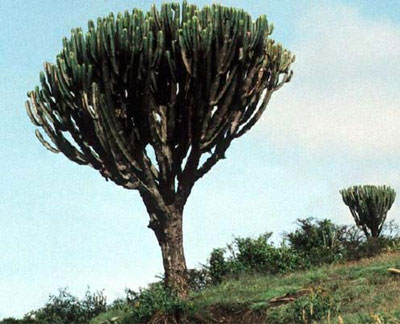 There were twenty sisters who went down to the river in the heat of the day, took off their clothes, and played in the water. A man came by who had eyes in his feet. He sat down on the dress of one of them and watched them at play. He said, “If she who owns this dress wants it back, she must bring me thorns.” The woman whose dress it was brought him thorns. He took them from her and stuck them in her flesh. Then he lifted her and flung her in the air. When she came down she was a thorn tree rooted in the earth.

Her sister, seeing what had happened to her, fled, and no matter how desperately she called them they would not come back.

Then one day Heiseb, the god who walks among people, came to the place and heard the tree calling. He commanded the woman to come forth from the tree-and she came. He asked her where her nineteen sisters were, and she did not know, for they had fled from her.

Heiseb saw a bull approaching and told the young woman to grasp the horns of the bull to discern where her sisters had gone. She was afraid but followed his suggestion and grasped the bull by the horns. Instantly she knew where she would find her sisters.

Heiseb asked whether she would be all right to go alone in search of them, but she asked that he accompany her, for she was still afraid.

So Heiseb and the woman came at last to where her sisters dwelt, and Heiseb asked where was the man who had changed their sister into a tree. They did not know and asked him, who knew all things, to tell them where he was.

Heiseb suggested that one of them should take off her dress and lay it down while he and the others kept watch.

Sure enough, the man approached and sat down on the dress. When he demanded thorns for the release of the dress, Heiseb showed himself.

“Thorns we have none, good friend, but here is that which is sharper than thorns.”

And he drove his spear through the man’s heart.

One interpretation of this story is clearly sexual, it seems to me. The man has eyes in his feet, not in his head; that is, he sees only with his lower self, not his higher. He watches the naked girls and forces one to make love to him. In Africa thorns are long and dangerous. Even in English-speaking countries a penis is often called a “prick.”

The young woman cannot go with her sisters after the act. Her life has changed. She is restricted, shamed, and shunned. The rape has changed her and locked her into a state of hopeless inaction.

The god sees her plight and helps her. It is important that before she can return to her family and her normal life, she has to grasp the horns of a bull. She has to face the bull and take control. She has to accept what has happened to her and fearlessly grasp the power of the sexual act for herself.

The god punishes the man, but the women who had deserted their sister have to play a role in capturing him.

The story can also be read as an allegory of the man’s spiritual progress. He has eyes in his feet; that is, he can see no further than his immediate physical surroundings. He demands thorns as the spiritual beings he sees in the river of life, thus wasting a wonderful opportunity for spiritual advancement. He has no conception of what spiritual riches he could have from his encounter with the spirit-women; perhaps if he had asked and not demanded, the whole scenario might have been different. As it is, he aggressively seizes what he wants and by doing so brings about a kind of stalemate. He wanders on, unregenerate, and is caught by making the same mistake again.

Why are there twenty sisters? According to J.C. Cooper, in An Illustrated Encyclopedia of Traditional Symbols (p. 120), twenty is the number symbolic of “the whole man” because it is the sum of all our fingers and toes. The women in the river constitute a whole. The man takes away part of the whole. Disunity, discordance, destruction follows. Only in the reuniting of the sisters in a common air to destroy their destroyer is wholeness restored.

What is sharper than a thorn? Sudden revelation. The spear pierces the man’s heart.

Posted with permission from Myths of the Sacred Tree, 1993, Destiny Books, Rochester, VT.

Moyra Caldecott is a prolific writer with more than twenty titles to her name. She lives in Bath, England.  Her website is www.moyracaldecott.co.uk

Purchase Myths of the Sacred Tree:www.mushroompublishing.com