A story from Zimbabwe
As retold by Michael D. McCarty

Editor’s note: In this tale, the central character’s fortunes take a turn for the better after he climbs a tree. For this reason it is included here in this collection of tree tales.

Once there was a young boy who lived in a village in Zimbabwe in the south of Africa. He lived with his mom and dad who he loved very much. But his aunt also lived with them and she just seemed to live to tell him what to do. 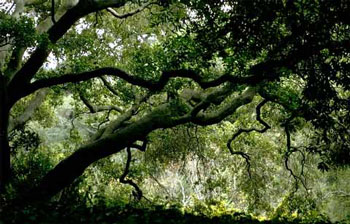 Sometimes he thought he’d go to the local medicine man and get some kind of herb or potion that he would put into his aunt’s food that would shut her up. Or he’d dream that when he got to be older, and bigger and he had more bass in his voice, he’d go up to his aunt and yell at her like she’d always yelled at him.

But he didn’t do any of these things because his parents had taught him to be an obedient young man, and to be respectful to his elders, and “Besides,” said the father, “Yelling at you keeps her out of my hair so you’re just going to have to put up with it!” And he did.

But one day she asked him to do something that he really didn’t want to do. She wanted him to leave their village and to go deep into the forest and pick some fruit. Now the word was that in this area of the forest there were some caves. And it was said that in one of these caves there lived a Strange Creature, a creature with a big mouth and a big belly, who liked to eat human flesh! Needless to say the boy wasn’t happy about going but he went, because he was an obedient young man.

So there he was, outside those caves that morning picking fruit. But all the while that he was picking fruit he was listening, do-do-do-do-do…. He had his monster raider going on. Suddenly, there was a rustling in the bushes……… then there it was, the Strange Creature. It had a humongous mouth, a big belly and really bad breath! The creature’s breath was so bad that every time he roared trees caught on fire!

The boy ran as fast as he could. He ran so fast he would’ve left Marion Jones in the dust! But even though he was running faster than he’d ever run in his life, and even though the creature was really, really big, it was gaining on him. That creature was hungry and the little boy was going to be his breakfast. What was the boy to do?

So the little boy climbed up a tree and began playing his drum. Perhaps you aren’t familiar with the drum language so I’ll translate for you. It means, “Help! There’s a Strange Creature trying to eat me up!” That’s a loose translation but you get my drift.

As the boy continued playing his drum, a peculiar thing happened with the Strange Creature. The creature started to dance and dance and dance. So what do you think the little boy kept doing? That’s right, he kept on playing that drum. He played and played and played till the sun went down. Then the creature stopped for a second and looked at the little boy. Then, he boogied on back to his cave.

Well , what do you think the little boy did when the creature left?

He ran home. And who was waiting for him when he got there? You guessed it. His aunt ! And boy-o-boy was she fussing’ up a fit!

“Where you been all day and where’s my fruit?!?!” She started chasing the little boy all over the village. The boy had to dart here and dash there, and weave and bob. He put on some moves, Ricky Williams and Oscar Delahoya both would’ve been proud of. He hid until the next morning. That’s when he told his father what had happened. The father knew his son was a truthful young man and believed the young man’s story. He went to the auntie and tried to explain what had happened to her. Do you think she went for it? Nope. She said, “Ain’t no Strange Creature! He made that story up. Where’s he at? You better bring him to me!”

So that morning, the mother, father, little boy and the auntie all went to go pick fruit and check out the Strange Creature story. The aunt thought it was all a bunch of nonsense, but she was not going to pass up an opportunity to do some yelling. Yelling was her life.

When they got to the area outside the caves, the little boy along with his mother and father began picking fruit and putting it in bags. The aunt didn’t have a bag. Some might say she was a bag, but we won’t go there. But she was definitely a greedy gut. She went up to a fruit tree and started scarfing down fruit. Juice and seeds and rinds were flying everywhere. You needed safety goggles on if you were standing within five or ten feet of her.

Meanwhile, the little boy had his monster radar going on. Suddenly, once again, there was a rustling in the bushes. Then he heard the loud, terrible noise again. “Roar!” the Strange Creature with the big mouth and the big belly and bad breath, moving fast. He grabbed the boy’s father and swallowed him whole. He grabbed the mom and swallowed her whole. The aunt was so busy scarfing down fruit that she didn’t even notice what was going on. The creature tip-toed over and swallowed her whole. Then he looked over at the little boy and said, “Cookie!” And started making his way towards the little boy. What do you think that he boy did?

Yes indeedy. He climbed up in a tree and started playing his drum. And what did the creature do? He began to dance. But the boy was upset, because he’d just seen his mother and father swallowed whole by the Strange Creature. But he wasn’t upset about the aunt. That was cool. But because he was upset, when he played his drum he played it real fast. And because the creature had rhythm, he kept up with the beat.

Now if you’ve ever been in a situation where you’ve swallowed two or three people whole and then started to do some boogying, you might know what happened next. The creatures big old belly was shaking up and down and from side to side and he went, “Bbrappp!” Then suddenly it threw up the father, who was still alive and sucking air but very slimy. The boy said “Yesss!” And got back on that drum. He played faster and faster and once again the creature went , “Brappp!” And up came the mother. “Alright,” said the little boy. Then he began playing his drum real slow. Why?? Beause he liked the aunt right where she was in the belly of the Strange Creature. But the boy’s father said, “Son, you must play your drum fast. You must get your aunt.”

But the boy began whining, “Aw dad. Do I have to? It’s so peaceful. Can’t we take the creature home instead?!?” “No son,” said the father, “You must get your aunt back!” Well he was after all, an obedient young man. So begrudgingly, he played faster and faster and faster till the creature went “Brrappp!” And up came the auntie. The creature choked and gagged and spit cause the aunt tasted bad going down and even worse coming back up!

Well the creature kept on dancing, until the sun went down. Then what did the creature do? He boogied on back to his cave. When the creature left another strange thing happened, this time with the aunt. She wasn’t yelling any more. Something about being down in the belly of that Strange Creature had chilled her out big time. And from that day on she never yelled at the young man again. And so they all lived happily ever after. And that’s the end of that.

As storytellers, we have an appreciation for the power of story. Many of us make a point of collecting and developing stories that are not just entertaining but also have strong values. But you never know what in a story will have a profound impact on a listener.

“The Strange Creature” is a story I began telling in February 1993. I’d become a professional storyteller in July of 1992 and was intently searching for material. I ran across this tale in Children of Wax, a collection of African folk tales by Alexander McCall Smith. It was a fun story and because of the drumming and boogying that were integral to the story, it was perfect for my style of hyper kinetic telling. It quickly became my signature piece.

In the fall of 1993, I was invited to tell stories to several groups of children at a spiritual conference in the San Francisco area. On that Saturday I told a variety of stories to these three different age groups. Among the stories told was “A Strange Creature.”The kids had a great time.

On Sunday morning, a mother of one of the girls who’d attended my presentation approached me and said that her daughter had loved my stories, and wouldn’t let her go to bed before telling her one of the stories. The story she chose? “The Strange Creature.” Then she told her mother that I was a reason for her to keep living! Now I am someone who is not uncomfortable receiving praise but that was a bit much even for me. I asked her what that was all about.

The mother explained that her daughter had been in a deep funk for a couple of years. There’d been a divorce. They’d moved to another state which lead to the trauma of uprooting and making new friends. The mother had a new boyfriend.

All of this must have been a tremendous burden for this young girl. But something about listening to those stories, and especially “The Strange Creature”, had pulled her out of that funk for a little while and for at least that weekend she was like any other ten year old again.

I have a variety of profound stories in my repertoire. I never considered The Strange Creature one of them. But on that day and at thatpoint in time, for that young girl it was very profound. You never know.

Smith, A. M. Children of Wax

Michael D. McCarty is a multi-cultural teller of African, African-American and international folktales, historical tales, science stories, spiritual stories as well as the stories and absolutely stupid things he has done in his life. He has collected and told stories in South Africa, Zimbabwe, India, china, Jamaica, Russia, Egypt, England, Maylaysia, and Korea. His motto is, “Have mouth, Will Run It!” Michael’s website is http://www.havemouthwillrunit.com/