A tale from Japan
Retold by Rafe Martin

Once there lived a young samurai named Tomotada. 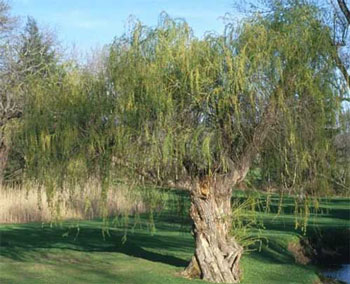 Though he had been trained for war and was skilled in handling the bow, spear, and sword, he spent much of his time tending the trees of the palace grounds. Tomotada loved all green, growing things. But he greatly loved trees.

One day Tomotada was entrusted with an important mission. He was to carry a message scroll from his lord to the lord whose castle lay beyond the mountains. It was a great honor.

It was early autumn, the day bright and clear, when he rode out of the palace gates. The golden willow leaves waved in the breeze as if in farewell.

Tomotada rode all through that day. As he approached the mountains, the sky grew black. Lightning flashed, a cold wind blew, and a heavy rain was soon pelting down. Tomotada rode on, urging his horse forward along the slippery trails. Night was fast approaching. A fall on those mountain passes could easily mean death. Up ahead Tomotada saw a gleam of light. It vanished, then shone again. Heading toward it, he came to a small hut. Near the hut, by the banks of a stream, stood three willow trees. Two of the willows were old, heavy-limbed, and grew close together. The third willow was young, graceful, and slender. Willow branches tossed by the wind had hidden and then revealed the light shining through a crack in the hut’s shuttered window.

Soaked and chilled, Tomotada tied his horse’s reins to a willow and knocked at the door. It opened. “Come in, young sir,” said the old man who stood in the doorway. “Come in out of the storm. Green Willow will see to your horse.” Tomotada turned and saw a cloaked figure leading his horse to shelter. He stepped inside.

A hot bath took the chill from his hones. Dressed in dry clothes, Tomotada sat down to a steaming meal prepared by the old man’s wife. The door opened and a cold wet wind blew in.

“My daughter,” said his host, “Green Willow.” Shyly the figure removed the wet cloak. Tomotada’s heart skipped. The girl was beautiful, graceful as her namesake, the willow. Tomotada forgot his dinner. He forgot his mission. He could think only of Green Willow.

Late into the night Tomotada sat and talked with tile old couple and with Green Willow. Green Willow’s voice seemed as soft and sweet as the rustling of willow leaves to Tomotada. The turn of her neck, the lilting of her hands and arms were as graceful, as beautiful to him as the swaying of a young willow in a spring breeze.

At last Tomotada lay down to sleep. Outside, the wind moving through the leaves of the willow trees made a gentle music. Words for that music rose in his mind: “Green Willow. My wife will be Green Willow.”

Alas for Tomotada, the next day dawned fair and clear. He would not be able to remain. Once more his mission called. With a heavy heart Tomotada watched as Green Willow led his horse from the stable. He saw the tears in her eyes. He knew then that he could never leave her. “I will be back,” he said, “as soon as my duty is fulfilled.” He mounted his horse and rode away.

All that day worry gnawed at his heart, shouldn’t he have asked for Green Willow’s hand in marriage before he had left? Would he still find her there when he returned? Such thoughts gave him no peace.

As darkness fell he came to an abandoned temple. Wearily he dismounted. As he entered the temple, he heard a movement in the darkness. Instinctively drawing his sword, he called out, ”Who is there? Show yourself or I strike.” A figure rose from the shadows. “Green Willow!” And so it was. He sheathed his sword and held her close. How she had ever found him in that lonely spot, how she had arrived there before him-such thoughts he did not think. No. He had his Green Willow.

Tomotada could not leave Green Willow again. They set off along the roads together, little caring where those roads might lead. In time they came to a city where Tomotada’s lord was unknown. They married and, with the money and jewels Tomotada carried sewn into the lining of his robe, they built a house near a stream. “Someday.” he said, “I shall return to my lord and ask for his forgiveness. But not yet. No, I can not leave yet.”

One summer’s night Tomotada and Green Willow sat in their garden. Water splashed in the little stream nearby. Leaves rustled on the evening breeze. The perfume of many flowers scented the air. Suddenly Green Willow cried out in pain, “My tree! My tree!”

“What is it?” Tomotada asked urgently.

Perspiration stood on Green Willow’s brow. “My tree!” she cried again. “My tree. Don’t let them! Not now! Oh, but they are cutting, cutting. The pain! They are cutting my tree! Oh, dear Tomotada, husband,” she said feverishly, I am sorry that I took you from your duty’. But I loved you. I shall always love you. Farewell.”

“What are you saying?” he cried. “You are here with me. All is well. What…!” But before he could finish, Green Willow was gone! In his arms he held not a woman but a bunch of long, slender, golden willow leaves.

In his heart Tomotada knew the truth. But it was a truth that even he found hard to accept. He renounced the world, gave away all his possessions, and became a wandering monk, a disciple of the compassionate Buddha. Often he slept in the open fields beneath the stars or meditated alone in the mountains with only wild animals, rocks, and trees as companions. He prayed for all the living things-animals, plants, and trees.

One day he found himself standing beside a familiar stream. It was, he realized with a start, the place where the hut had been when he had first met Green Willow. There were no traces of the hut at all. But three cutoff stumps remained standing there-all that was left of the two old willows and a young one.

Putting his hands together, palm to palm, Tomotada sank to his knees and recited a prayer for the dead before the willow stumps.

Foolish man, he thought to himself, what would people think to see you praying over willow stumps?

Then hands still palm to palm, he once again chanted the words that bring peace to those gone beyond this earthly life.

Tomotada’s pilgrimage was over. He built a hut on the spot, and there he remained. In the spring he discovered a green shoot growing from the stump of the young willow. Tomotada tended the shoot. It grew into a graceful sapling, which put forth slender leaves that rustled and whispered in the breeze. At night the music those leaves made moved through his dreams. “Green Willow,” a voice sang to that music, “Green Willow.”

The tree grew taller and more beautiful with each passing year.

At last Tomotada’s life came to an end. A seed drifted down from the tree to rest where his bones had joined the earth. In time a new shoot came forth. The shoot grew and grew until it too was a sturdy tree. The trunks of the two willows grew together. The branches intertwined. Down under the earth the roots found each other in the darkness and embraced.

When the wind moves, rustling the leaves of those trees, it is as if they speak. “Tomotada,” one tree seems to whisper, like a dreamer turning in sleep.

And the other seems to murmur as if in tender reply, “Green Willow, Green Willow.”

As a child I spent many happy hours in tree tops. Trees were my friends and companions. Trees, of course, freely give us life-sustaining oxygen. Without them and other plants, there could be no life on earth. Might not this great gift be considered a kind of love? I find stories like “Green Willow” important today, when so many forests are in danger. Tales like this one help reconnect us with our own perhaps temporarily forgotten love for our benefactors, the trees.

This tale is adapted from a tale I found in Lafcadio Hearn’s collection, Kwaidan. Hearn was an American writer who went to Japan and stayed there for the rest of his life, marrying a Japanese woman and in time, collecting traditional tales. When he first arrived he wrote:

“Why should trees be so lovely in Japan? …. Is it that trees have been so long domesticated and caressed by man in this land of the Gods, that they have acquired souls, and strive to show their gratitude.. by making themselves more beautiful for man’s sake?”

Shinto, the original religion of Japan, maintains that clouds, mountains, rocks, ponds, trees and animals all have Spirit, or kami power. In a Shinto shrine you may see a stone on a brocade cushion with offerings of incense, tea or flowers set before it. You may notice certain old trees with rice-straw girdles knotted around their trunks–signs of the indwelling Spirit. Nature is a vast, shimmering web of interconnecting beings and realms, a place of spiritual mystery and not a set of mechanisms.

Buddhism, specifically Zen Buddhism, has also had a lasting effect on Japanese thought, aesthetics, martial arts and religion. This emphasizes that all forms of life are One and yet, simultaneously, each bug, leaf, mountain, person, dog, rock, or star is completely itself and unique. Compassion for every living thing permeates the Buddhist vision of reality.

These two cultural strands–Shinto and Buddhism–come together in the stories of Japan. Some of the most spiritual Japanese tales, like “Green Willow” are ghost tales. But unlike many ghost tales familiar to Westerners, their purpose is not to horrify. Instead they distill the essence of what is mysterious in life in order to remind us of the dreamlike–“ghostly” if you will–reality of things. Beauty itself may be a goal in these stories and it can be haunting.

Several years ago when I was presenting some stories in a Tokyo highschool, a student explained that ghost tales were traditionally recounted on summer nights. “Why?” I asked. “Because,” she answered, “summer nights here in Japan are very muggy and very hot. Ghost tales make you shiver. They give you the chills.” “Ah,” I said. So ghost tales are our original airconditioning!” We may have laughed at that idea but I think it is true that tales like this one can be a refreshing and much-needed breeze for our overheated imaginations.

This story and commentary are excerpted with permission from Mysterious Tales of Japan, by Rafe Martin, Putnam and Sons, New York, 1991. Purchasing information available at
www.rafemartin.com/byrafe.html

Rafe Martin is a distinguished author and storyteller, with more than twenty books to his name. To learn more about Rafe and his work, visit his website at
www.rafemartin.com

A online version of the tale from which “Green Willow” was adapted can be found at:
www.sacred-texts.com/shi/kwaidan/kwai13.htm

Information about Shinto religion can be found at:
www.japan-guide.com
www.religioustolerance.org