A Tale from the Marshall Islands
Told by Nitwa Jeik, edited by Daniel A. Kelin, II
from a translation by Sylvia Lolin 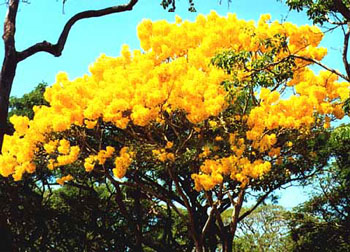 The iroij (chief) of Rongerik atoll owned a tree with the most beautiful yellow flowers, the kio (see notes). Every morning his flower-pickers draped the flowers about his head and neck. The people of Rongerik danced as the flowers were placed on him.

Not far from Rongerik atoll is the atoll of Ujae, an island of demons (‘timon’ in Marshallese-see notes). One morning, two demon sisters from Ujae smelled the beauty of the flowers. Their desire for the beauty grew until one night the two flew to Rongerik atoll.

The demon girls chanted as they draped themselves with the iroij’s kio:

“Beauty collected in woven baskets,
We hook flowers behind our ears.
Decorating each other,
We fly, fly far away.”

When the new morning dawned on Rongerik, the people danced. But the iroij flew into a rage. His flowers were gone. He ordered the flower-pickers to be killed.

On the fourth morning Bwilbilinlokerem, the iroij’s assistant, pleaded with him to stop the killing. “Someone must be stealing your flowers. Let me try to catch them tonight.”

That very night Bwilbilinlokerem took several men and hid by the tree. Just as they were nodding off to sleep, they heard the demon girl’s chant:

“Beauty collected in woven baskets,
We hook flowers behind our ears.
Decorating each other,
We fly, fly far away.”

As the Ujae sisters leapt away from the tree, the men grabbed them. They hauled the demon girls to the iroij’s house.

The iroij didn’t even bother to look at the two of them as he ordered Bwilbilinlokerem to kill them. The men dragged the sisters away. “Let us go, iroij.” The demon girls cried out, “We will go straight home and never come back.”

The iroij glanced down at them. “Stop,” he told his men, then turned to the two. “You are very beautiful.” Touching each girl tenderly on the cheek, he continued. “Instead of killing you, I’ll take you as my wives.”

A great wedding ceremony was held. The people of Rongerik welcomed the girls to the clan. From that day forth the sisters lived with the iroij as wives and the iroij once again got his morning flowers.

In time, however, the girls missed their parents. They begged to return, but the iroij refused to let them go. The girls persisted, promising to return. The iroij finally relented. He ordered a canoe made ready. Together, they sailed to Ujae. They landed near the place called Menkaru.

The oldest of the girls flew off immediately as they landed. The iroij grabbed the younger one and held tight. He ordered the men to go and search for his other wife. He, his young wife and Bwilbilinlokerem went off to find the demon parents.

The demon people crept out of the bushes as the Rongerik group left. They pulled the iroij’s canoe onto the shore. They took it apart and buried it, piece by piece, in the sand.

“We’ll catch them and we’ll eat them,” the demon leader told his people, “we’ll cook them with breadfruit and taro.”

The demons danced about and sang their demon song. They sang to alert the demons in the nearby islands.

“What did you do with it?” the iroij yelled at Bwilbilinlokerem.

“We left it…” he tried to answer, but was interrupted by a sound.

“Kaibad O Kaibad,” the demons sang to each other, gathering for their feast.

The iroij’s men jumped. “What’s there in the bushes?”

“That’s my family,” the young girl told the chief.

The young wife called to a karuk, a tiny crab.

“Dig, dig into the sand.
Find what’s hidden there.”

“Kaibad O Kaibad,” the demons sang to each other, gathering for their feast, echoed under her chant. The demons gathered beyond the bushes. The karuk dug up one part of the canoe. The girl called to it again.

“Dig, dig into the sand.
Find what’s hidden there.”

“Kaibad O Kaibad,” grew in strength and numbers. The men saw shadows of the demons dancing in the bushes.

The karuk dug quickly, bringing up different parts of the canoe. As it dug, the men built it again.

“Kaibad O Kaibad,” sang the demons as they gathered at the edge of the jungle carrying baskets of taro and breadfruit.

The canoe was finished. The demon girl told the iroij’s men to bring two long sticks from the wut ilomar, a special tree (see notes).

The demons stepped from the bushes. The men threw the branches into the canoe. They set sail. The girl took the sticks and stood at the front of the canoe.

The demons leapt into the water, swimming after the iroij’s canoe. As the demons reached the canoe, they climbed aboard.

“The stick floats on the ocean,
It drops from the canoe and all are eaten by the sharks.”

She swept every demon from the canoe. Then she saw her parents and older sister fly to the canoe. The young girl lay down the sticks.

“Come with us now,” her parents called to her.

“I wish to stay with my husband.” She told them and called, “Older sister, come back with me.”

The parents turned to the iroij, “If you take our daughters, keep them with you all the time. If you climb the coconut tree or if you go fishing, they must always be there beside you.”

One day, much later, the iroij went fishing by himself. Black clouds gathered above him as a big wind swooped in. The iroij paddled hard against the wind and waves, but to no avail. Right then he remembered his promise. “I didn’t take the girls with me.”

He was blown away, away, away until he disappeared. Up to this very day no one has seen the iroij. The demon sisters returned to Ujae.

That’s the end of the story.

***The kio is a tree known for its beautiful flowers. It is significant mainly in that it was a particular favorite of that iroji

*** In the Marshallese folkloric lexicon timon suggests a wider range of characters and creatures than the malevolence associated with the word “demon.” I leave it to the reader to come to his or her own definition of “timon” through the context of the story.

***The demon-sweeping powers of the wut ilomar seems to hark back to a pre-missionary time when certain trees were regarded as magical.

The Marshall Islands are located in the Pacific Ocean just north of the equator and a bit west of the international date line. Spread over 750,000 square miles of water are twenty-nine atolls and five islands consisting of more than 1200 separate islands (depending, of course, on the height of the tide). The Marshall Islands are a very Christian society and what few gods once appeared in their pantheon are long since forgotten, ignored or considered blasphemous. But within the stories, one gets a sense of a world populated by numerous “other” presences.

My initial purpose for visiting the Marshalls was to work with a social organization dedicated to working with youth to teach about health, social and cultural issues. I stayed in local homes, sleeping at the local schoolhouse or hospital. I sang with the local people, danced for them, talked story about America and the world. Finding that the youth responded strongly to their own folklore traditions, I began collecting tales from the islanders which led to the creation of my collection, Marshall Islands Legends and Stories.

Having Marshallese youth perform legends is an attempt to instill a respect for a culture in the midst of this change, while trying to stop the materialistic attitude of tossing out the old for the new.

Storytelling, song and dance are the most lasting traditions of the ancestors of the Marshall Islanders. The oral tradition, however, has not been able to keep up with the quickly developing tradition of television and videotapes. Music is still very much a part of daily life but is challenged by church music on one side and rock on the other.

The young people celebrate their cultural heritage by bringing the past to full life in a way that is engaging and fun, but most importantly in a way that makes it theirs; their stories, their dance, their language, and, as it is improvisationally built, their own form of interaction and humor. The youth learn the skills, but find ways to use those skills to touch their audience as other media cannot. It is a selective syncretism that has fired a need within the youth to seek out their unique traditions of storytelling, dance and song.

“Demon Girls of Ujae” worked incredibly well as a performance piece with Marshallese youth, mostly because of the richness of character and character interaction which gave them a great deal to relate to and create from. The tree itself literally took center stage, as the entire action of the story is predicated on the love of it’s beauty. This offered the youth and I a chance to discuss the natural beauty of the islands and flora. Having that tree (or rather a prop tree) around all the time excited them as well, as the smell and beauty of the (real) flowers we used enticed them to play with and wear them. The allure captured in the story rang true even in modern times.

Nitwa Jeik, the dri-bwebwenato (storyteller) told me “The Demon Girls of Ujae” on the front walkway of the school. When I asked him if he was afraid the stories will be forgotten he told me he plans to tell them to his son then added, as he pointed to my tape recorder, “you’re recording them now.” He didn’t offer explanations about this tale but reading between the lines, the tale seems to be a cautionary tale about leaving home.

I am happy to share this legend of his with you. Share it with others. It will certainly make the storytellers happy. It will infuse the legends with the life they deserve. Kommol tata (thank-you).

Daniel A. Kelin II is the Director of Drama Education for the Honolulu Theatre for Youth. He also serves as Director of Summer Theatre Training with Jodrikdrik Nan Jodrikdrik Ilo Ejmour, a Marshall Islands youth organization. His work with Pacific Island youth is profiled in Performing Democracy, published by the University of Michigan Press.

Kelin frequently tells Pacific-based stories throughout Hawai’i. Under two different Rockefeller Foundation grants, Kelin developed a play for HTY based on the songs, dance, and folk stories of the Marshall Islands.

The American Alliance for Theatre and Education named him the 1995 Youth Theatre Director of the Year, and in 1999 he received an Aurand Harris Playwriting Fellowship from the Children’s Theatre Foundation of America. In 2002 he was awarded a runner-up Barbara Karlin grant from the Society for Children’s Book Writers and Illustrators.

This story is excerpted from Marshall Islands Legends and Stories collected and edited by Daniel A. Kelin, II with permission from Bess Press Publishers, Honolulu. Copies can be obtained through the publishers website www.besspress.com.